In John Daly’s March 13, 2013 deposition, he admits to drinking alcohol, almost the entire day of May 25/26, 2011, with his fellow officers, while on Cape Cod to attend the The 2011 New England Narcotics Enforcement Officers Association (NENEOA) Conference.

I said, around lunchtime, which was the early

afternoon. I checked in. I also received, I

clam bake dinner. And that was it.

Mr. Daly then proceeded to his relatives house, located in Hyannis, he opened the house, “relaxed” and then went out for lunch. He brought lunch, and fellow officers, back to the house and began drinking.

went to the house.

Question: Did you go by yourself?

Question:And I presume you just socialized with your

Daly: There was no one at the house at the time.

I opened up the house.

Question: Or did work; right? What did you do then?

Daly: A few people, I believe, came to the

house — actually, no. I went to lunch and brought

the lunch back to the house, and a few people came

to the house at that point.

Question: coming there first before going back to the

Daly: Well, I — before going to the clam bake,

Question: You don’t remember who else other than Mr.

Woodman and Borum came to the house?

I think Brian Tully was there; maybe Steve Gondella.

Question: When you say maybe, do you recall Mr.

Question:How do you spell his name?

Question: Is he a law enforcement officer?

Question: And who does he work for?

Question: Where does he work?

Question: Okay. And how about Woodman and Borum?

Daly: Woodman works for the Haverhill P.D., and

Question: Anyone else that you can remember being at

Daly: I’m sure there were more people there, but

I can’t think of who else.

Question: How many people were there, even if you

can’t remember who they were?

Question: Do you recall that there, in fact, were

thers other than these four people you’ve

identified; you just can’t remember who they were,

or you’re just not sure?

Question: What did you do at the house?

Daly: We ate lunch and then, at that point, we

walked down to the beach.

Mr. Daly socialized for several hours at the house, and the beach, while drinking alcohol.

Question: Were you drinking at your relative’s house?

Question: Were you drinking on the beach?

Q.What time would you say you showed up at

there, I believe the Bruins game was just about to

While at the “Clam Bake” at Pufferbellies, Mr. Daly was seen drinking by his fellow officer Christopher Borum.

Borum: Probably, I believe he was drinking in that bar

and two other locations.

Q    Where were the other locations?

Borum:  Seaside, which is a bar on Main Street, and

After about a half hour at the conference, Daly and Borum left, and headed to the Seaside Pub on Main Street, Hyannis and continued drinking.

Q.Okay. After — when did you leave Pufferbellies and where did you go?

Daly: We left Pufferbellies, I would say, at

about 8 o’clock, and went to the Seaside Pub.

Q.Were you drinking at the Seaside?

After about 3 hours or more, Daly and Borum, left the Seaside Pub, and headed to the Steakhouse on North Street, Hyannis and continued drinking.

Q.Were you drinking at the Steak House?

After the assault Daly and his friends. headed to the 19th Hole on Main Street, Hyannis, to catch last call.

Daly: After I received my phone?

Daly:Just talked about, you know, what just

Q.And who was there that you were speaking

Daly: There was people that weren’t even at the

Q. Okay. Anyone else who was at the Steak

Daly: There was — I think Mr. Hyde was there, 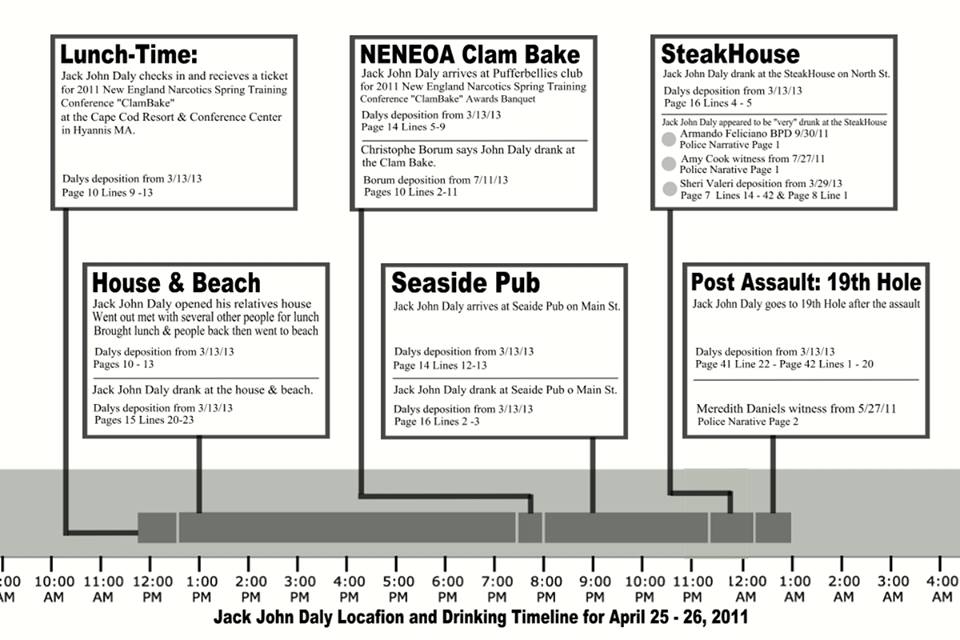 In addition, Barnstable Police Officer Armando Feleciano’s police narrative, describes identifies Mr. Daly, as the owner of the phone , and comments on his appearance, upon the officer’s arrival to the Steak House.

“ I observed Daly to be intoxicated with blood shot and glassy eyes, I could also smell a strong odor of alcoholic beverage emanating from his person and breath.” 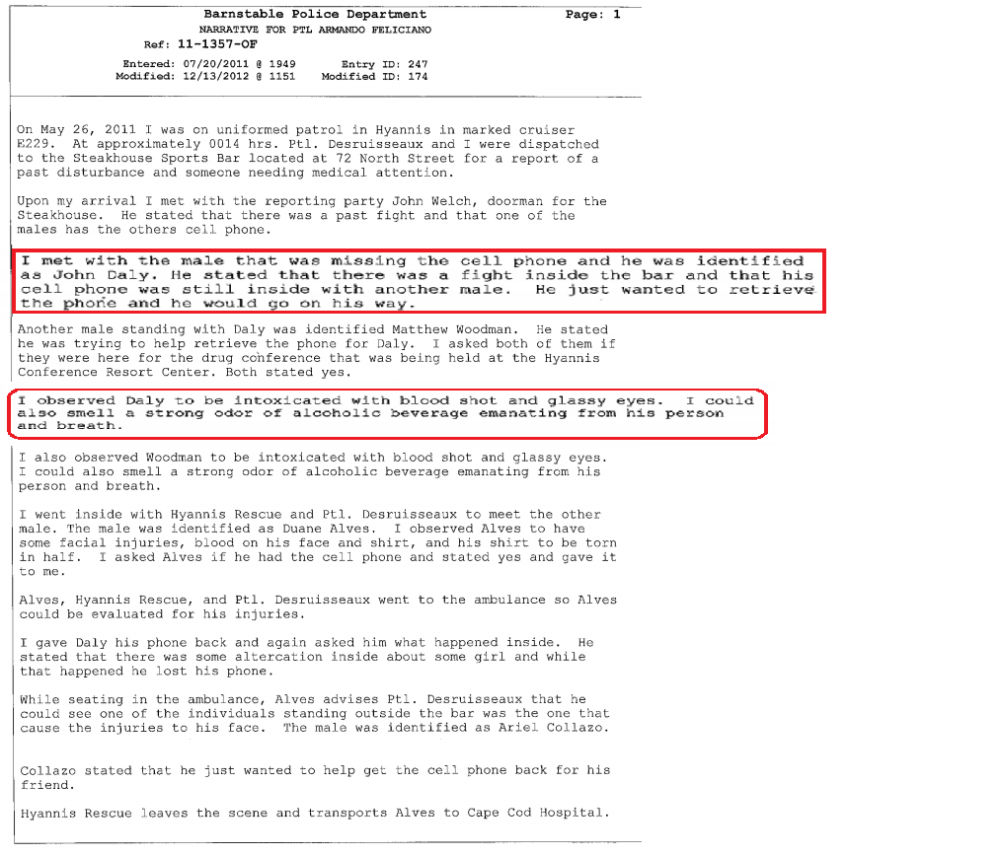